or  How could something so RIGHT, be so WRONG?

We all love a good index. But when indexes go wrong, they can infuriate readers and destroy one of the most important ways to access a book’s information content. The following tale of (narrowly avoided) woe may help to illuminate some of the pitfalls … 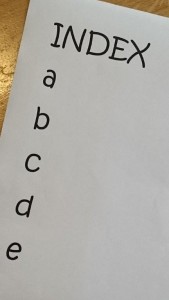 I’m an editor; I’ve edited and checked a lot of indexes, but I do not compile them. A proper professional indexer could no doubt provide a more forensic analysis than I offer here (and I apologise for muscling in on their turf). Still, in my non-specialist view, the three Rules of Indexing would be something like this:

Following Rules 1, 2 and 3 is not a simple mechanical task. In fact, indexing is a much under-rated skill. The best advice is always to hire a proper indexer if possible (the Society of Indexers website http://www.indexers.org.uk/ might be the starting point). Still, a lot of authors, editors and other non-specialists do have to create their own indexes, for various reasons. I hope that the cautionary tale below might help them to identify, and therefore avoid, some of the common traps.

A while ago I had cause to look over a couple of indexes for non-fiction books, before publication. Both indexes were technically accurate: all the words indexed were indeed in the books, and the page numbers given for them were correct. Rule 1: tick. However, the indexes failed so dismally to follow Rules 2 and 3 that they were unpublishable as they stood (and indeed they were not published). I’ll demonstrate why, with examples, below.

(By the way, I’m certain these indexes were compiled ‘mechanically’, using an automatic program or the search function. There’s nothing wrong with using software for indexing – but it is a tool, not a substitute for an indexer’s own brain. A thinking human indexer will read the text thoughtfully, and use their own judgement and understanding to select, filter and structure the entries. Otherwise the result, as in this case, can be something that looks like an index, but does not function as one.)

First, neither index had been assembled by a specialist, but (I think) by one or more helpers, not familiar with the text, but helping the authors out. It is definitely not my intention to be mean about those unknown person(s) or to mock their efforts. Indexing is difficult, and that’s why there are professionals! I’m posting this in the hope that others who find themselves unexpectedly in the indexing boat will take some constructive help and ideas from these examples.

Second, I have not used real names or quotations from the texts, because I don’t want anyone to be able to Google the extracts and identify the books I’m talking about. Also, of course, the indexes were both redone before publication. So don’t bother looking – they’re not out there. The ‘quotes’ below are 100% made up, though they very accurately reflect the (mis)usages I’m talking about.

One book discussed a family in which the father and son had the same name. They were indexed as if they were one single person. ‘Mr Smith, senior’ and ‘Mr Smith, junior’ (or ‘father’ and ‘son’, or life dates) would have sorted that out.

Abstract nouns can be tricksy. In one of my troublesome indexes, some entries appeared to be themes or concepts – but were not. ‘Truth’ had five page numbers. One might legitimately index ‘truth’, of course, but in this book four of the five mentions were quotations that said things like, ‘I had never seen such a woeful index, in truth, and could not wait to absent myself from it’. You don’t need to be a specialist to know that’s daft. What does the reader find out from looking that up? The fifth instance was a reference to someone perhaps not telling the truth about a certain event, so could sensibly have been indexed: but without that context of person or situation, the entry was nearly meaningless. ‘Pinocchio, truthfulness of’?

Likewise, ‘Death’ was included. Not because the text discussed death as such – no, these were just fleeting references to the deaths of named persons, mostly persons who were not even important characters in the narrative. ‘After the death of Fred Nameless [never mentioned again in the text], Our Hero went to work in Birmingham.’ Far better to index ‘Nameless, Fred, death of’. Or even just ‘Nameless, Fred’, since his death is the only information ever given about him.

‘Crafts’ was indexed. Well, that’s vague. One might ask, what kind of crafts? Various kinds of artwork and handicraft work, from different countries, were mentioned in the relevant book. Could this mean embroidery, ceramics, jewellery …? No. On all three pages cited, the word was used as a verb – for example, a writer was said to ‘craft’ an image in his verse. I speculate that the indexer probably added ‘craft’ but then a well-intentioned somebody made it plural ‘for consistency’, because it looked like a noun and other nouns were indexed as plurals (cats, fruitcakes, violins). Hey presto – meaning accidentally, but completely, falsified. ‘Poetic imagery, crafting of’?

A word can have more than one meaning – that’s hardly breaking news, but it’s a trap for unwary indexers. Here a ‘Trials’ entry included two references to trials (i.e. tests) of a certain invention or piece of machinery, and one reference to a person’s trial for murder. Need I say these should not have been mixed up together?

‘Lovers’ was an entry – with a very long string of page numbers, and no clue about whose lovers they were in each case. In a book that discusses a number of named individuals and their complex relationships, how, honestly, is any reader going to use that entry? Too vague, too general. ‘Mrs Robinson, lovers of’? ‘Chocolate, lovers of’?

Although those anonymous ‘lovers’ were included, significant concepts of different kinds of love and friendship, and depictions and examples of them during the historical period under discussion, were not. Other important themes in that book, which I can’t name without giving away too many clues to the identity of the volume, were also absent.

Such thematic entries can be tricky: they require thought and understanding, and a deep and careful analysis of the text. Indexes can omit such things altogether, and stick to straightforward names and places only, of course. There’s no dishonour in that. In this case, though, entries such as ‘truth’ and ‘death’ gave the impression that the index was covering themes and concepts, but: a) it wasn’t; and b) those weren’t the right themes anyway. Misleading on both counts.

Adding insult to injury, in both indexes the entries were not structured: important and oft-mentioned persons’ entries were long, undifferentiated strings of page numbers. Ideally, no more than six (or so) page numbers should be listed without subdivision. With no sub-entries to help them navigate, readers wanting to find Lady Nuptial’s wedding, or the discussion of her correspondence with Lady Epistle, might well have to look up every one of twenty-two page numbers … Grrr. There are various ways to break up and structure long entries with subdivisions. Looking at a few good non-fiction book indexes will give ideas for structures that suit your project, and believe me, readers will appreciate that effort.

Despite a lot of work and well-intentioned effort, those two indexes both had to be re-created. A sad story for all concerned.

So a final word of advice – admittedly from a non-specialist. If you can possibly hire a professional indexer, or get advice from one, do so. If you have to construct an index yourself, keep it simple – and keep taking a step back and thinking about what the index does and how it will be used. And always ask someone else to look at the index and undertake some spot checks of entries – a fresh pair of eyes may pick up errors and infelicities that the compiler has become way too close to the material to see.

Then congratulate yourself – you’ve done a difficult job, and one that many, many readers will thank you for. A decent index is a thing of beauty, and a joy forever. At least until the revised edition …

4 thoughts on “When indexes attack”